Using the classic stats as skills in Lunchtime Dungeons

More controversial hackery from the Irish frog! Well, I need to think about this, and no one's forcing you to read my internet brain.

For months now, I've been on the fence about a skill like mechanic in Lunchtime Dungeons. I need to keep the game simple and beginner friendly, following principles like always roll high and no modifiers to rolls, but I cant decently get rid of things like the dwarf's underground lore, the cleric's smite & turn, or (obviously) the thief's skulduggery.

Let me be clear: I don't think skills killed the game back in '75, but I don't want them to go out of hand. And when I find myself writing stuff like 'Gain pastry chef d8' in the haubitz's progression table, it's clearly out of hand.

So I'm going to try and use the six stats as skills. I should mention at this point that LD doesn't use stats at all for the sake of simplicity. But I'm kind of pleased about having these iconic words on the character sheet again.

The system is simple. Skills are a die, from d4 to d12 (with most classes starting with d6), and you need a 4 to succeed. I don't intend to write rules on difficulties and target numbers, but I'm sure I'll ask for a 3 or a 5 here and there.

I'm only giving one skill to each human class. Strength to fighters, Intelligence to wizards, Wisdom to clerics, Dexterity to thieves. There is even room for a barbarian and a warlock or bard (but additional places aren't my priority).

The demihumans have two conditional skills: the dwarf gets Wisdom d6 and Intelligence d6 when underground; the haubitz has Constitution d6 to resist fatigue and Dexterity d6 to hide; and for the elf I'll go with Charisma d6 to impress and Intelligence d6 for ancient lore. I know what you're thinking: he's introducing complexity just two minutes after pledging to KISS. Hey, it's a work in progress.

Another thought while I'm at it: these six dice are probably going to be renamed feats. So you roll a feat of Strength to lift that gate, or a feat of Charisma to sway Old Pigface into betraying the goblin enchantress.

This is where I think this might end up working somewhat elegantly. As per the master rule in Lunchtime Dungeons, you only roll a skill die if a task doesn't put you at risk. If there is a chance of you or others being harmed, you have to save. Saves are rolled with a d20 plus a skill die against a target number. (This is also how I handle combat - characters have a basic attack skill and can get weapons skills along the line.)

EDIT: Following some useful comments by Brian and Bruno on G+, I thought I should add that the d20 save comes with a range of results that let me describe various degrees of success and failure, offer choices, take away resources, etc. Here is the table I use:
Until now, characters only had one save die. Well now they have six. But they don't have a fuzzy cloud of skills.

Posted by Eric Nieudan at 10:37 No comments:

Two of my goal designs for Lunchtime Dungeons are: simple procedures for shorter sessions and deadly combat. With that in mind, I'm going to test the following hack. I'm open to thoughts and suggestions.

* You can use Constitution in your six-stats game.
** I'll probably rename it to Soak Die or something.

Posted by Eric Nieudan at 12:09 No comments:

d66 exploration and encounter table for The Lost City 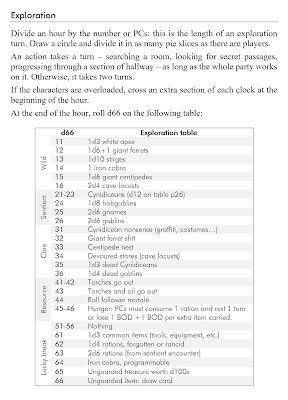 The exploration procedure has been working pretty smoothly for a few months now, but I was inspired by a peek Luka Rejec gave us of his d100 event-slash-encounter table a while ago. Earlier inspiration comes from the Hazard System by Brendan S and some parallel thinking by David Black and Chris McDowall a couple years ago (which had prompted me to work on the same kind of table for Macchiato Monsters).
[/namedrop]

(Yeah, I made an HTML joke. I'm not feeling well today, okay?)

So for the next while I'll be dropping the 2d6+1d6 random encounter model and try this thing out. The monsters are from level 1 of B4: The Lost City because that's what I'm running this week. In your game, BOD points can be treated as hits or CON/STR, depending on how easy it is to recover HP.
Posted by Eric Nieudan at 12:07 No comments:

The Neon Marsh is in alpha

It took me a while, but I've completed the text of the first setting for Macchiato Monsters. It's not something I had planned to do from the start, but I hit a snag with the Build-your-own-setting booklets so when Paolo suggested a mini-setting to support the release of MM, I thought I could use the tools I intend to put in said booklets to create something. So here it is:

I took some chances with this. It's ten pages, including the cover and three one-page dungeons, so it is very terse. The world material is presented alphabetically, which may not be the best way to communicate it. And there are a lot of holes to fill in, DIY style. We'll see what reviewers say.

In any case,  I had a lot of fun inserting as many 1980s sci-fi references into a pseudo-Arthurian plotline. Here is an extract from the introduction - well it's about half of it. Told you it was terse.


The Neon Marsh lies south of the island of Freetannia, a fragmented kingdom whose folk forgot their past glory. People toil in the service or war dukes and petty kings, while bards still sing the prophecy of the Queen of Future Pasts, who shall unite the land again. People come to the Marsh running from the law, mining for NEON, or looking to understand the weird phenomena called GLITCH.

That's one thing off my plate for a little while. Next up: Ford's Fairies, aka the Henry Justice Ford Monster Manual Project.

Posted by Eric Nieudan at 10:41 No comments:

How to Make Goon Master Character in Macchiato Monsters 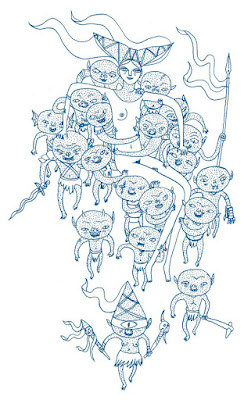 Some time ago,+Samuel Guillon's character managed to convince a tribe of goblins his character should be their new god. He asked about taking a trait like God of the Goblins to have a following of fanatical flunkies. I made this mechanic in a G+ comment, but recently thought about it again, and realised it was a way to emulate +Benjamin Baugh's hilarious class, the Goblin Enchantress. (Follow the link to see +Evlyn M's beautiful illustration in full size.)

Take a trait such as Goblin Enchantress or Zombie Master or Baker of Sentient and Homicidal Cupcakes. This doesn't give you advantage to checks, nor does it grant you outside help like an organisation. All you have is your band of fanatical goblins, crazed cultists, animal automata, etc.

Write down Goons dR8 * on you character sheet. They work as a group just like a follower (roll the dR whenever they attempt something risky). A step down means some of your goons died or were otherwise lost. As suggested by +guillaume jentey  on G+, you can use your Goons dR as armour or as magical components.

If the dR is stepped down to nothing, you have to attracts more goons. Wait d8 days and you'll have your dR8 back - the referee can give you a smaller die in less time if they so choose.

Whenever you roll the maximum result on the dR, step it up. Either your goons get smarter/stronger/better at working together, or more of them just show up.