Macchiato Monsters is a rules-light, old school, slightly collaborative roleplaying game. I designed it for adventure, exploration and survival in all kinds of perilous dungeonverses. If that were legally safe, I might have called it Dangers & Decisions. You can also say it’s an OSR and DIY D&D game, if labels are that important to you. Key features:
The game is published by Lost Pages. Character sheets and cover painting-with-actual-coffee by Guillaume Jentey, editing by Slade Stolar, publishing by Paolo Greco. 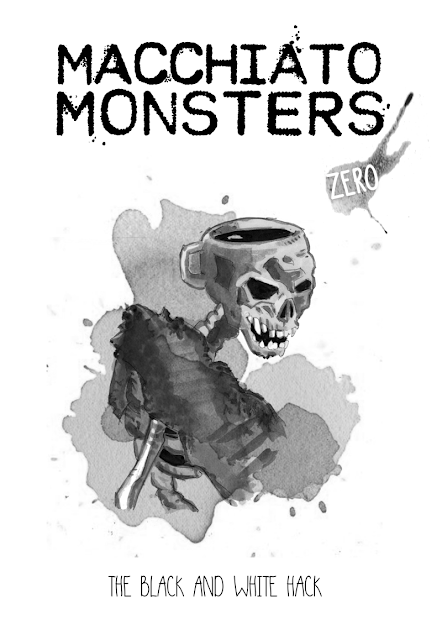 Buy in PDF (DrivethruRPG $4)
Please note that this is the Zero Edition; the full version will be published in December 2018. The PDF is regularly updated with corrections, rules, and an extra 20+ pages of campaign tools (there is a link to a work in progress document in the book). Also, some things you may want:
The best way to let me know what you think of Macchiato Monsters is to post on the dedicated Google+ community. But if that’s not practical for you, just send me an email.

Why another DIY D&D hack? Well I’ve been interested in old school games for several years now. What was first nostalgia for my awkward preteen years has become genuine interest for a different way to arpeegee. So I ran and played a bunch of clones, several old versions of D&D, and modern reworks of the Hallowed Ancestor like Into the Odd, which I had fun twisting into a post-apocalyptic fantasy setting.

In late 2015, I happened to have two campaigns, one running an astral island version of Keep on the Borderlands with Whitehack, the other one running RND issue one* with The Black Hack. The latter game felt so much easier to referee, but I really, really liked the collaborative worldbuilding aspect of the former. So I started printing out bits of The Black Hack (the Kickstarter wasn’t even a thing by then – I’m so hype) to paste in my Notebook edition of Whitehack with notes.


*Chris Stieha’s amazing write-you-own-module series. The most creative thing you’ll do all year, trust me